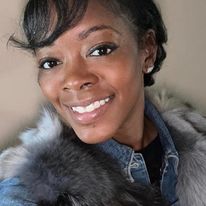 Ontaria Kim Wilson is a native of Philadelphia, PA. She has over 29 years in the entertainment industry. She began her journey with the world renowned Rennie Harris Puremovement Hip Hop Theatre Company in 1991. She was a founding member and bid farewell to the company in 1997 to go on tour with R & B recording artist, Gina Thompson. She toured with Gina Thompson throughout the USA and Europe for a year. In 1998 she toured with Hip Hop recording Artist Eve as a background dancer and choreographer. While with Eve she was honored to perform on the following television shows: Soul Train, Show Time at The Apollo, NFL Under The Helmet, Motown Live, and The Conan O’Brien Show. Her next honor was choreographing and performing with the legendary Teddy Pendergrass. She toured with Teddy from 1999-2002 throughout the USA. She was honored to perform with Teddy in his last recorded performance “From Teddy With Love.”
Ontaria’s passion for dance thrusted her into the spiritual side of dance. In 1999 she became the dance ministry director for The Calvary Baptist Church of Philadelphia. During her tenure she became a dance ministry consultant for churches throughout the tri state area until 2015.

In 2013 she left her job at The Hospital of The University of Pennsylvania to pursue the arts full time. That year she began teaching performing arts to elementary school aged children and she wrote and produced her first stage play “THE HEALING.” The Healing was her breakout production that confirmed her lifelong purpose of sharing the arts to touch one soul at a time.

In 2014 she wrote, produced, and directed her next staged brainchild “DETOX.” Detox has transformed the lives of many people because of it’s message of healing the family by decreasing the use and power we give modern technology and social media. Detox has been in rotation for six years and is currently in post production as a feature film.

In 2018 she was a co author in the Amazon Best Selling anthology “Bruised Broken & Blessed” published by Penlegacy. She also erected her third explosive stage production “BEAUTIFUL TOXICITY” which proved to be the catalyst for her first solo author experience. Because of the audience’s request for more she converted the stage play into a book under the same title. Beautiful Toxicity was published by Penlegacy in 2019.
Ontaria is also an accomplished actress, director, screen wright, certified life coach, and she holds a Theatre Degree. She is a co author of “Slay Your Legacy” (a book anthology focused on the keys of manifesting the life you want) compiled by Charron Monaye and published by Penlegacy Publishing Company.

Her mantra is “If God has downloaded a dream or vision into you it’s your responsibility to complete the assignment. Someone is depending on your “yes!”